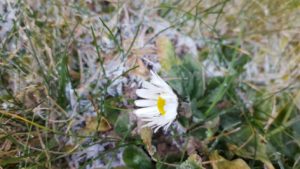 It’s the day after. February 23, which comes right after the big anti-bullying day, pink T-shirts and all. Back when Tony started school we would purchase them directly from the teacher. Now you can buy them in stores too. Store clerks need to buy them too in some stores. I guess to prevent customer bullying?

It sounds nice and dandy and looks all innocently pink that day, but then when the next day comes… The boys’ T-shirts, because you had to buy one for each as a statement to your anti-bullying stance (I mean theirs,) went in their drawers until the following year when, if they still fit, they’d be worn to affirm their opposition to bullying.

Now here’s the thing: there was no way to make them wear them another time in between anti-bullying days at school because… ‘Mom, it’s pink.’ Right. I did not have a colour-coded childhood, and neither did my boys. They wore colours and some happened to be shades of this or that and that was that. Still, that pink T-shirt was a no-go.

You see, Sasha was already in the pink corner you could say. Because of his long hair (longer than your average boy haircut,) he was called ‘she’ by this one (short-haired) boy in his class. Yeah, dare wear some pink, Sasha, why don’t you. He didn’t. Also, he corrected the boy explaining that he is a boy. The ‘she’ appellation continued. Subtle but undermining when you’re grade 3.

My point is: the pink T-shirts work as long as they’re being backed up by true to form authority stance on bullying. Which on many an occasion does not happen. Many children end up bullied and alone in it. Just recently, two teenage boys from an Edmonton school (yes, the same school), committed suicide. They were Tony’s age and younger. Their deaths brought forth many more complaints from other students who have been bullied over the years, or were while they went to that school. The administration concluded there was no bullying in the school and most likely dressed everyone in pink yesterday. For anti-bullying day.

I see the pink T-shirts as a good initiative, but if you have it but once a year, you’re looking at 364 days of ‘fingers crossed’ in hope that all goes well and bullies dissolve in thin air. They don’t. Moreover, because bullying went from directly belittling and hitting someone (at least you knew where it came from,) to the insidious and seriously harming cyberbullying, the threat is higher than ever nowadays. Children likely need some pink body and mind armour to keep them safe from that kind of threat.

Pink T-shirts alone are simply not enough to protect children against bullying. A strong anti-bullying affirmed position needs to be there all the time or else we will keep on seeing people getting hurt. No one should feel alone while dealing with bullying and yet many do.

I recently chatted with a young man, a neighbourhood high school graduate. He explained the facts: when you enter high school you might make a friend or two if you’re lucky. If you ever get on the bad side of someone popular and get bullied, you better not complain to any teachers. ‘Walls have eyes and ears’ he said; you learn that soon enough. He was happy to be done with that chapter. ‘I wish I could one day say it like it was so enough people will know.’ I could see no need to ask if he had his pink T-shirt on occasionally. It sounded like it would’ve have made a difference anyway. Like a pink band-aid, it would cover the wound but not protect against other injuries or deal with what’s causing them.